Food Advertising by
Sago OR Tapioca OR Sabudana .. Its a tempting bowl of sabudana that could just make you leave your chores and have a rest while relishing its taste. I love Sabudana, but I have had it only in the form of simple kheer until yet. Now, am on my way to experiment with it. But since I always read about what am eating, here are some facts about sago as well :


Sabudana is full of starch or carbohydrates and is great for a quick boost of energy, and hence often served in India for breaking fasts during religious festivals. Sago gruel is also great when you’re sick because it gives you quick energy and is easy to digest. According to Indian medicine, sago and rice have a cooling effect on the system, hence sago gruel is given if you have excess bile (caused by excess body heat).

Sabudana is extremely low in fat but also low in protein. As it’s just starch, other than the carbohydrates, nutrition-wise, sabudana does not contain any minerals or vitamins and has very low amounts of calcium, iron, and fiber. However, you can make up for this by using other ingredients with it, such as milk for making sabudana kheer/payasam/gruel or vegetables and peanuts for making sabudana khichdi. Sago powder can be used as a thickening agent in gravy dishes, and sago flour can be used to make flat-breads. Sago can be made into vadas and boiled and sun-dried and made into pappadums too..

Anyways, here follows an experimented form of Sabudana kheer with coconut milk and jaggery. These days, am trying to substitute sugar when and wherever possible. With this recipe too, I have taken out the sugar completely and replaced it with coconut milk and jaggery. It was sweet enough with a different colour ( Of jaggery ) and nice aroma.. I read somewhere its a Burmese dish, though am not sure.. 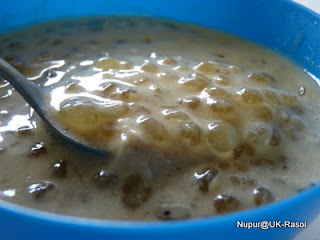 
Method:
1. Soak Sabudana for an hour in water so that it swells up. Keep aside
2. Heat water in a pan, disolve  jaggery in it and keep stirring till it melts completely. Drain the impurities and keep aside the jaggery syrup.
3. Heat coconut milk in a pan, let it boil. Add jaggery syrup and stir frequently for 10-12 min on a medium flame. Add cardamom powder and mix well. Pour in a bowl and keep in fridge to cool off.
4. Heat 3 cups of water in pan, add sabudana in it and let it boil. Simmer it for next 10-12 min or unless it gets transparent. Drain it and rinse under cold water so that the pearls looses some starch and become grainy.
5. Heat milk in the pan, add sabudana with a pinch of salt and simmer for 8-10 min. Turn off the flame and let it cool on room temperature.
6. After almost 2 hours, when the coconut milk mix in the fridge is cool enough, add sabudana-milk into it and  mix well.
7. Enjoy it chill . You can keep it further again into fridge for chiller pudding. 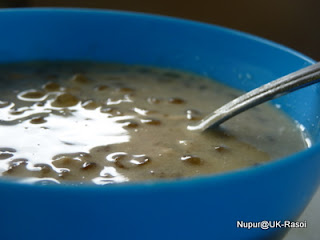 Notes:
1. You can replace sugar with jaggery if you dont like the taste of jaggery.
2. You can skip milk completely too. Just boil sabudana in water and drain.
3. You can also serve it warm. I like it cold, as jaggery tastes better when cold 🙂